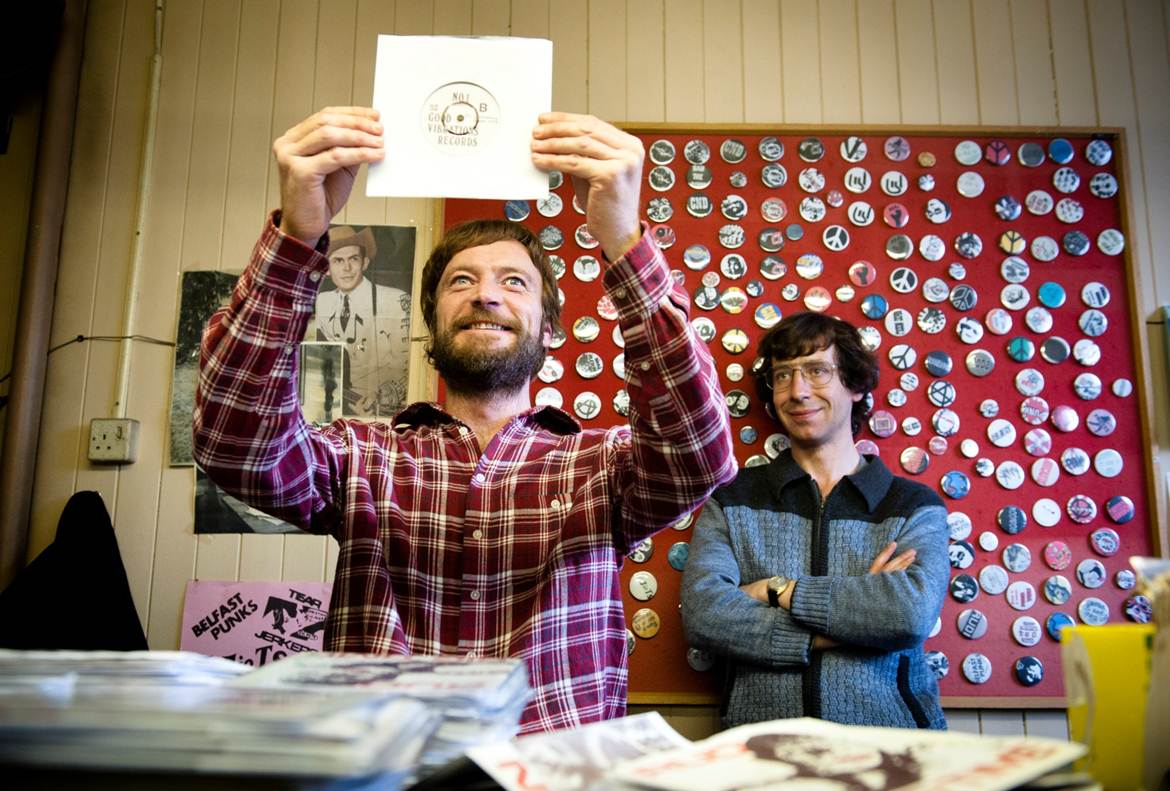 In the early seventies, Terri Hooley opened Good Vibrations record store on the most bombed half-mile in Europe. Beginning life as nothing more than a kick against the pricks, the shop became first port of call for striplings involved in the fledgling Northern Irish punk movement spearheaded by Hooley himself. From the directorial duo behind 2009’s Cherrybomb, the film is a tender portrait of the Troubles cultural messiah-elect.

A film about Terri Hooley and the shop had been in the pipeline for over ten years. What made you feel that this story was finally ready to be told?

L:  We were put in contact with the writers Colin Carberry and Glenn Patterson who had been thinking of it for quite some time – a decade at least. They’d been making some moves to try and get it made but at that time there were various reasons it didn’t quite get off the ground. I think one of the reasons was that Terri didn’t want to sign the Life Rights agreement and allow the story to be told until he was ready and felt the timing was perfect. The point at which he felt happy was also the point at which there was a team of key players in Northern Ireland who knew him through the background of the story from the inside. I think that meant a lot to Terri – that a lot of key players that understood how it should be told were committed. People like David Holmes and Gary Lightbody were on board, who knew Terri and the Good Vibes shop really well, or had been in bands with him.

When did you first hear about Terri and what was it about the story that convinced you the subject deserved a biopic?

G: Well, Terri’s very famous in Belfast and the story has done the rounds in many a bar, so we’d both been aware of it for a really long time. We were a little bit too young to be at some of the gigs we recreated in the film but it was important to us to renew the Good Vibes ethos. In regards to the second part of the question; there have been a lot of stories told about the conflict in Belfast in the seventies and eighties, whether concerning prisoners or soldiers, generally looking at one side or the other. Of course, a lot of these stories are true and should be told, and in most cases are told really amazingly by some of the best directors we have, Steve McQueens Hunger or Paul Greengrass’s Bloody Sunday, for example. But that’s one side of the story, and unlike the others this film is really a celebration of this wonderful moment that’s been ignored. It’s also quite positive and upbeat, which I suppose is quite unusual for a film about that time.

L:  We felt that there was something really universal to the story – at its heart it’s about the power of music and how it can bridge barriers, even at the worst of times. That definitely felt like something that we needed to bring to a wider audience.

You’ve mentioned that punk fans at the time wanted to be seen as kids having fun, not casualties of war. Did you feel it was important to shift focus almost entirely onto the music scene?

L: Obviously, the Troubles background was necessary, but we always wanted it to be an exploration of youth and music – more of a celebration of what Terri felt was the true spirit of Belfast; young, irreverent, creative voices. So our aim was to tell the story of an alternative Northern Ireland, where you could part with the identity of being from the place the Troubles was happening. We wanted to show that young people at the time weren’t defined by the Troubles.

G: We always say that we’re showing that world through Terri’s glass eye. It’s a different view of Belfast that he pioneered himself, and you know, he’s very funny and charismatic, so we wanted to try and inject a lot of that humour in if possible.

L: We were so thrilled with Richard’s performance. He’s just an incredible actor with great nuance and warmth – there’s an almost childlike quality to it. He really captured that vision that Terri had and the way he was out on his own, doing things on his own terms.

Hooley himself was involved in a large part of the filmmaking process. How important was it to tell the story accurately with all his flaws intact?

G: Terri was involved in the film right from the beginning and that came down to him being comfortable with the team around him. We had him on set a lot of the time and he also had a cameo in the film, as did his daughter. He was involved in every stage really, and we felt it was important that he was. I think it is fair to say that the film is unflinching in the way we show all sides of Terri and I think he’d be the first person to say it’s an accurate representation of him. But you know, even though we’re celebrating him and his achievements, nothing can really prepare a person for seeing themselves portrayed on screen; so we set up a private screening for Terri and a few close friends. But the thing about that is “a few close friends” to Terri could mean 400 people, as you see in the film. So, he watched it, which was hugely nerve wrecking for us, and when it was over gave a very warm and kind speech, thanking us and saying how proud he was of the film- it was just an incredibly generous response. He’s seen himself on screen several times now travelling around the film festivals with us and it’s always quite an emotional experience for Terri to watch the film.

Similarly to something like A Hard Day’s Night, which captures Beatlemania perfectly, the film really has a seventies feel – right down to the earthy colour palette used. How did you feel the best way to achieve this vibe was?

G: It’s interesting that you mentioned A Hard Day’s Night because Richard Lester was actually one of the filmmakers we looked at while making it.

L: Well, we had a lot of great archive material and of course the original memories of the bands. Brian Young (Rudi’s lead singer) would bring all kinds of photographs, articles and old tour stories of Rudi and The Outcasts and also talked us through the outfits, while our brilliant production designer Derek Wallace created these amazing sets based on original photographs. One of the first things we shot was the record shop set and I remember Terri, Ruth and Anna coming onto the set and you’d almost think it was the real thing – they were pinching themselves. Terri actually got quite emotional because it felt exactly like his shop. Our costume designer Maggie Donnelly (who won the IFTA for her work) knew the period, had dressed the part and met Terri before so she could look back on that time and come up with something real. Films like Shellshock Rock were also a great source of inspiration; documentary footage of the clubs, the background and the punk scene. We were shooting very quickly but we always had a close-knit group around the set, who would get up on stage during the band scenes and sing along, so it really felt like we were actually in that moment.

G: I think it’s a testament to the legend of Terri Hooley’s shop and his legacy; the big gig at the end of the film required two thousand extras and we were unsure if we could physically manage it – we even talked about using CGI or crowd simulation, which probably wouldn’t have looked great. But we thought about it and Snow Patrol came up with the idea that we’d put on a free acoustic gig. So they advertised on their website that they’d put on a gig in the Ulster Hall for two thousand people wearing seventies-style clothes. We had about an hour to shoot it all, and on the night they all showed up, dressed brilliantly and were ready to sing along with the performances and create an amazing atmosphere. The punk subject of the film needed for everyone to be rallied and it ended up like a proper gig – hopefully that comes across on screen.

L: The young actors we had on set like Killian Scott (Love/Hate) and Andrew Simpson (Notes on a Scandal) just threw themselves into their roles as members of bands like The Undertones, Rudi and The Outcasts. It was great to see them hang out together, learning the tracks and the iconic punk stances – right down to holding the guitar.

One of the best scenes in the film is when John Peel plays Teenage Kicks twice in a row on BBC radio, while Terri and Ruth listen in and celebrate in their front room. It’s a really simple but effective scene that documents the launch of Belfast punk into public consciousness. What were your ideas for capturing this moment?

G: I think that moment has reverberated down the years – especially when you consider the fact that it was Peel’s favourite record and he had it on his gravestone – so it was always going to be a challenge to give that moment the impact that it deserves. It was something we worked over with the writers when we were devising the script and we all came up with a few ideas. In the end it all comes down to brilliant writing, but Richard and Jodie’s performances in that scene really brought another layer to it. It’s definitely something that we thought long and hard about.

L: When working with actors you always talk about the different stages the characters go through and different stages of emotion experienced. We didn’t get to shoot chronologically but we talked a lot about the build up to that moment, the anticipation of the characters and the pressures that they were under and in the end the pair of them captured the emotions brilliantly.

Good Vibrations is out now.