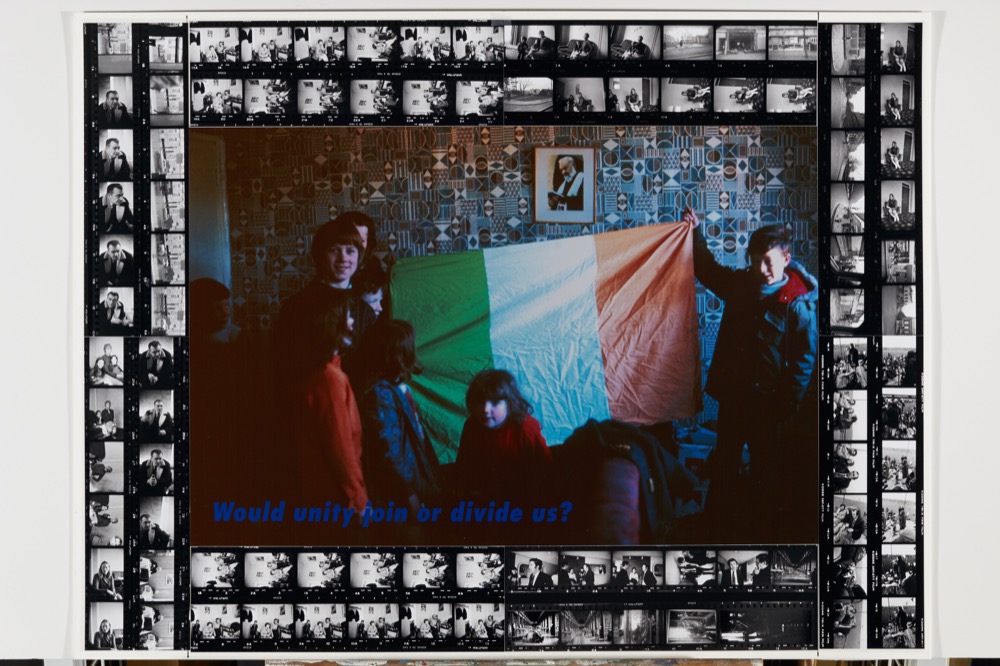 Few artists could be more severed from a sense of ego than Les Levine. His softly-spoken manner is an initial indicator of this; his self-effacing anecdotes poured through an accent that has no trace of his Dublin roots, but rather alludes to his long-standing US citizenship. Having skipped leaps and bounds ahead of 20th century art circles from the 1960s onwards, Levine’s vibrant strides into video art and, simultaneously, his spearheading of media art saw him lauded as nothing less than a visionary – but starting out, his naysayers were in plentiful supply. “From when I was a very young artist [onwards], I was told I didn’t get the point, the idea, the aesthetics, what it’s all about. Yet after a few years, they’re teaching the things that I first espoused in art schools,” Levine remarks, bereft of bravado. “But initially, nobody in the art world was willing to agree that media ever could be connected to art. Of course, when you think about it now, media is all over the art world!”. Over the course of our conversation, Levine offers up only two adjectives to describe himself: “perfectly ordinary”. Yet, as anyone who has come into contact with his work will agree, the artist’s prolific creative output – stretching from compelling billboard campaigns to evocative, cibachrome photographs – denotes a truly extraordinary eye.

This could not be better exemplified than in Levine’s latest visual offering, Resurrection – an IMMA-staged exhibition that marks a contemporary re-considering of his 1972 series, The Troubles: An Artist’s Document of Ulster. The latter comprised a suite of 80 photographs that Levine had previously donated to the IMMA Collection, all captured during significant visits the artist undertook to Derry and Belfast that same year. What’s instantly striking is his commitment to showcasing all conceivable sides of the conflict: Catholic and Protestant neighbourhoods are explored in equal measure, from intimate, family-home environments to explosive scenes. He acknowledges this inner will to document without a shred of discrimination, albeit in his typically-modest terms: “The thing is, it is not my job to [discriminate]. It’s not up to me to be throwing my opinions out, or trying to bias something in favour of the way I think. It’s up to me to create a situation which allows other people to find out how they think.” This desire to instigate dialogue underpins all of Levine’s projects, and no less palpably in Resurrection: 13 carefully-composed works see the children he photographed during the Troubles take centre stage. Their vivid, spirited faces amidst these zones of conflict are thought-provoking in themselves, but better contextualised still by the black-and-white borders juxtaposing each photograph (monochromatic contact sheets from the original 1972 series, as to let viewers understand the source). Levine’s powerful usage of text provides the final layer, each work colourfully embellished by a different question: Why is truth the first victim? Is our home truly our castle? Could this be the end of the line? 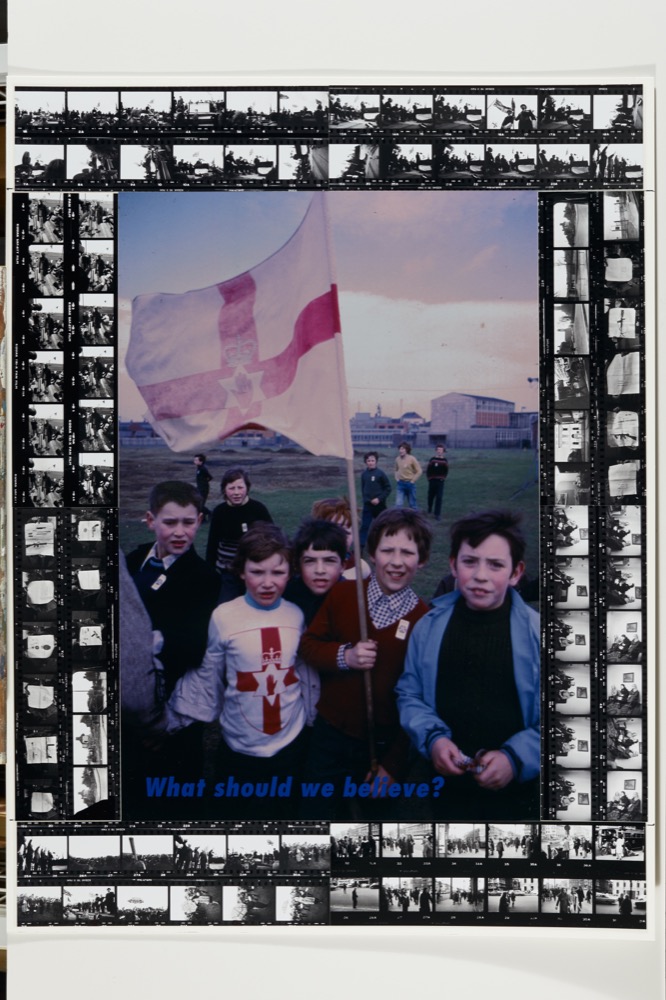 The catalyst for Resurrection’s creation was quite fortuitous. Levine was “looking through my archives in preparation for ‘The Bio-Tech Rehearsals’ show at Columbia University in 2016, [when] I was struck by the large number of children on the contact sheets of ‘The Troubles’… Looking back on these images of children resurrected many strong feelings I had while documenting them, and sent my mind racing through a variety of memories.” Having been stationed in New York for nearly a decade at this stage, garnering rapid success across the US and Canada, he had been attempting to inform his Stateside peers that “media was the thing that the art world should be looking at”, but their minds were still entrenched in the thought that “politicians make a mess of this world and then the artists are called in to make it beautiful again… around my 30s or so, people wouldn’t want to hear what artists had to say. So, when the opportunity to do ‘The Troubles’ came along, I said to myself, ‘this is the perfect piece to make it clear that artists have to get involved with media.’”

There’s a powerful duality to Resurrection’s photographs, largely down to Levine’s ethos of capturing people, not politics. On the one hand, these shots encapsulate a very specific moment in time, acting as invaluable historical documents that transcend any two-dimensional textbooks. On the other hand, these uncontrived scenes of children playing in the street, peeking out from politically-charged flags (the terrorising properties of which they remained, at least in that moment, blissfully unaware) is strongly reminiscent of today’s conflict zones and the innocent victims they continue to ensnare. Levine is not only aware of these parallels – he was mostly drawn to re-working the photographs because of these present-day turmoils. “The thing is, I wouldn’t have done this piece – or wouldn’t do any piece – if I didn’t feel that, immaterial of whether it’s talking about something in the past, it does address some issues of the moment. It has to do that, and whatever it’s addressing, that work of art has to make some contribution to the way you see the subject. This is a series about Northern Ireland, but you could put it into Syria, into Iraq. It is, in fact, the same kind of issue. Children have very little control of these adult, political situations but, nevertheless, they are the ones that suffer the most, because they are the ones that can’t do anything about it.”

Resurrection’s curator, Johanne Mullan, couldn’t speak more highly of Les’ creative collaborations with IMMA – but this subject strikes a particular chord, considering that she grew up in Belfast whilst the Troubles were unfolding. “I personally have such a strong affinity with Les’ work – that sense of honesty in his documentation is really important to him. I know myself, growing up in Belfast [during the conflict] life felt perfectly normal. It’s only really when you step away from it, like when I moved down to Dublin, that I realised just how abnormal it was.”

At 83 years young, Levine is well and truly tapped-in to the zeitgeist. Having witnessed the staggering ascent of technology first-hand (his ground-breaking work having helped it along), his take on social media and its trajectory is searingly accurate, citing the eschewed value systems that can be shared at the touch of a button. “It’s obvious that social media has done as much harm to society as much as it has done good. The tribalism it has produced is pretty scary – everybody has become a member of some kind of tribe, and this tribe is against that tribe. Because of the enormous speeding up of send-receive transactions, there’s no doubt that it has taken on an Orwellian quality. It’s not just big brother is watching, it’s now big brother, big mother, big daddy and your nanny watching, and it’s ripping the political system apart. Haters are joining haters at a faster rate than lovers are joining lovers.”

If one thing is certain, Resurrection has all the right ingredients to start a conversation away from digital screens, irrespective of who the spectators are – but any online commentary it does end up triggering (as it invariably will) would only cut through the artifice and champion human-to-human connection. “The main purpose, for me, of a work of art is to awaken the humanity in the person looking at it. I am not, in a sense, like other artists because I don’t take a position like, ‘I do this for myself and I don’t care who cares about it’. I work for the public – that has always been my view.”

Resurrection (1972-2016) is running in the Irish Museum of Modern Art, Royal Hospital Kilmainham, Military Rd from February 15 – May 6.