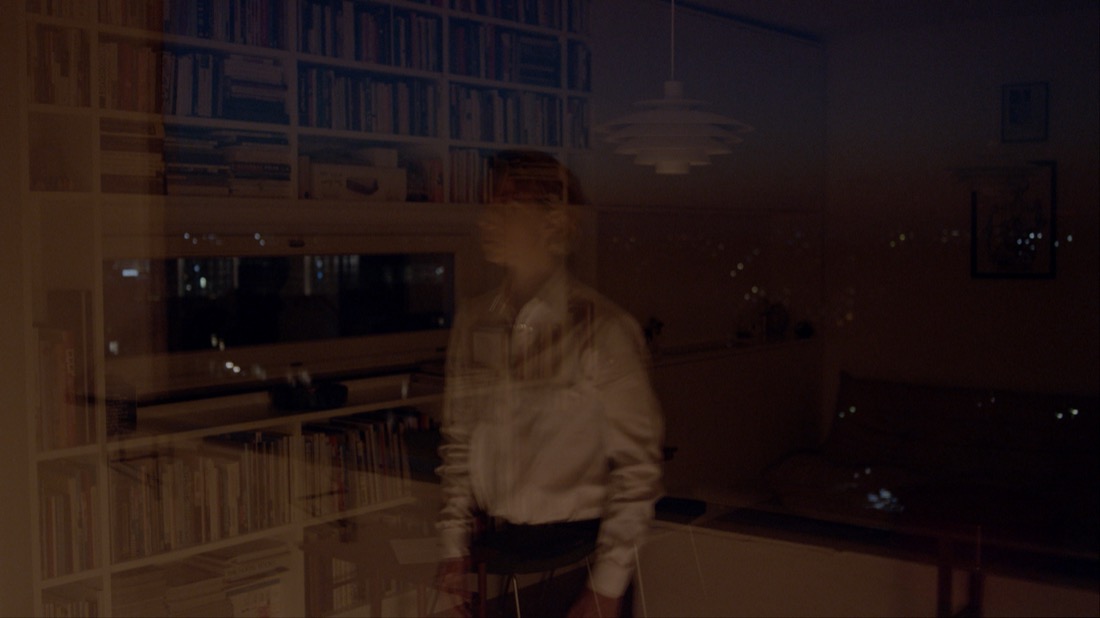 There is much to laud in the first thematic examination of IMMA’s extensive contemporary collection, amassed over 30 years, but its conceptual framing is a little rickety for our reviewer.

IMMA is celebrating its 30th birthday with an exhibition cycle called ‘The Narrow Gate of the Here and Now: 30 Years of the Global Contemporary’, which is the largest retrospective of its permanent collection in the museum’s history. As you might imagine, the scale of the project is extensive and, in order to do its collection justice, the curatorial staff have decided to split the exhibition cycle into four ‘chapters’. Each chapter will group the artworks according to a theme and the first chapter concerns ‘Queer Embodiment’.

The first, and most important, thing to say is that there is quite simply a wealth of vivid and profound art on display. One of my favourite aspects of the show, which was quite unexpected, was that I found many of the most compelling artworks in the exhibition were recent acquisitions produced by young Irish artists. 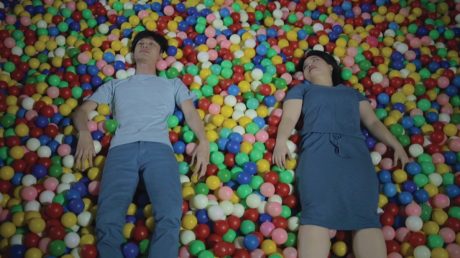 Their dialogue is a deft exercise in poetic speech that neither alienates nor annoys, but serves to create a lyrical emotional intensity with phrases like, “sometimes I think it would be easier if you died” and “where is the past, where is the future?” 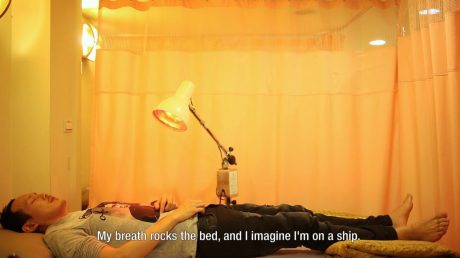 The discomfort that seems to characterise the protagonists’ relationships is mirrored in the tactile friction of soft and hard material arrangements: in one scene the lips of a speaking protagonist are held apart by cold metal hooks; in another, a smooth fleshy globe is cut by a serrated knife. 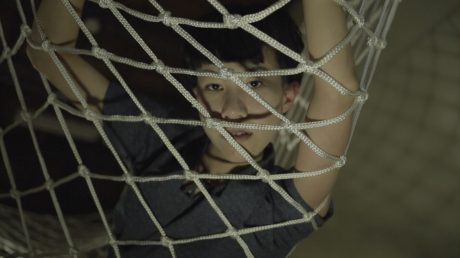 In the central episode, ‘The Elephant on the Roof’, an unknown narrator describes his experience of escaping military conscription by checking into a psychiatric institution, where his performance transforms into a new and frightening reality.

Another high point is Eimear Walshe’s ‘The Land Question: Where the Fuck Am I Supposed to Have Sex?’ (2020). This riotous artwork installs one of the most joyfully subversive experiences the show has to offer. I joined a pair of women to watch Walshe’s video, one old, one young, who were also strangers to one another, and at various stages we were all laughing loudly. 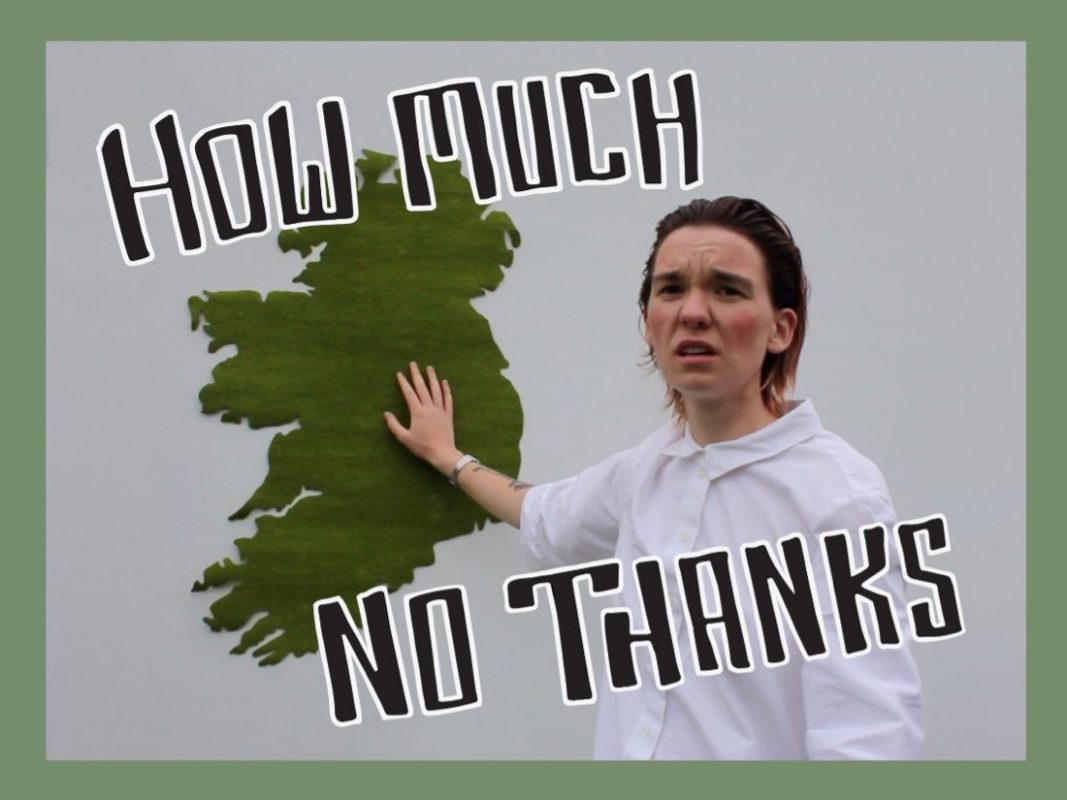 This is not to say that Walshe is some kind of comedian – their film discusses the historical development of the attitudes to land ownership in Ireland and conveys a lucid socio-political critique of the bungled management of our national housing market. But Walshe has enough insight into the nature of their role not to take themselves too seriously, which is a trap that some artists are caught in today, producing simple and didactic pieces that are intended to educate the public about the issue at hand. Walshe evades this trap by mediating her socio-political critique with a marriage of razor-sharp irony and disruptive aesthetic.

Doireann O’Malley’s extravagantly titled ‘Prototype I: Quantum Leaps in Trans Semiotics through Pyscho-Analytical Snail Serum’ (2017) is another highlight. Three large screens are organised to create an immersive panorama that O’Malley uses to their full extent. ‘Prototype I’ is a fascinating melange of cinematic art that interrogates the parameters of gender identity, the history of psychoanalysis, live-action role-playing and digital embodiment. 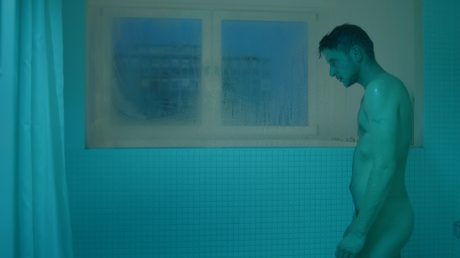 The juxtapositions of imagery and concepts are thrillingly achieved: in one particularly sublime sequence, a young transgender man monologues about the meaning and metaphysics of transitioning, while we watch him, in one frame, explore an austere, impersonal building, and in the other frame, play with the eponymous snails. The snails are vibrantly white and translucent, like the pale flesh of soft fruit, and their bodies flex and morph elastically as they move. The architectural spaces through which the man weaves are elegant, the modernist architecture leading him through corridors and courtyards where the distinction between inside and outside is made ambiguous. The overall effect is one of fluctuating structure, both organic and engineered.

The difficulty in talking about a show this size is that there are simply too many artworks to mention, never mind analyse, but by describing the work of Gaffney, Walshe and O’Malley, I hope I have given you enough of an incentive to view the exhibition yourself. You won’t be disappointed.

The text devoted to the exhibition cycle tells us that it “positions IMMA’s inception in 1991 as part of a crucial moment in the history of globalisation” by tracing “urgent themes across the 30-year period.” These urgent themes, realised in IMMA’s collection, should prompt “thinking about the effects of globalisation today in the Irish context as we respond to global crises.” Speaking more directly, IMMA wants to claim responsibility for vigorously pursuing these themes: “The Museum’s Collection and Archive reflects a strong history of feminist practice, relaying the defiance of women in Ireland against church and state oppression; as well as queer histories that capture moments of resistance and joy…” 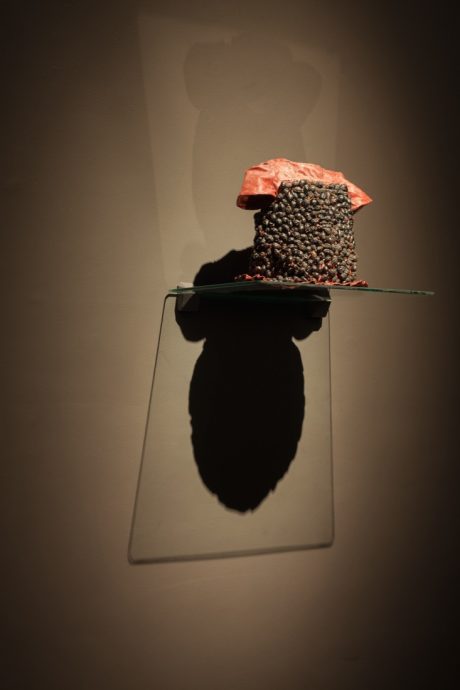 Personally, I would rather that the tone of the programme material was less strident. Given that IMMA is a state-sponsored institution, a certain degree of self-reflection and critical distance would be more appropriate in deciphering its role in the period under review. But that’s not the only thing that bothered me. What are we to make of the theme of this chapter? Contrary to the promise of the title, this is not an exhibition that has much to say about queer embodiment. After the first pair of rooms, which handle (very powerfully I might add) the subject of AIDS, and with one or two notable exceptions (including O’Malley’s work), explorations of queer subjectivity are largely absent from the exhibition. This is not to say that the rest of the artworks aren’t sensitive to issues of gender, because many are categorically feminist in tone. Clearly, however, there is a distinction between feminist and queer issues.

One of the principal ideas of queer theory is ‘heteronormativity’, a word that names the tendency in mainstream culture to understand human relationships monolithically as heterosexually male-female. Queerness, though famously (and often intentionally) a difficult term to define, is positioned to destabilise heteronormativity, in order to productively examine the full range of human desires that are otherwise read as taboo or transgressive by traditional heterosexual norms. Many artworks, then, can be both feminist and heteronormative, insofar as the critique of patriarchy does not necessarily entail a reassessment of heterosexuality. The curatorial framing of the show seems to elide the nuances that distinguish feminist and queer art from one another. At other times, confusingly, it does away with gender altogether, in order to draw our attention to issues of migration. 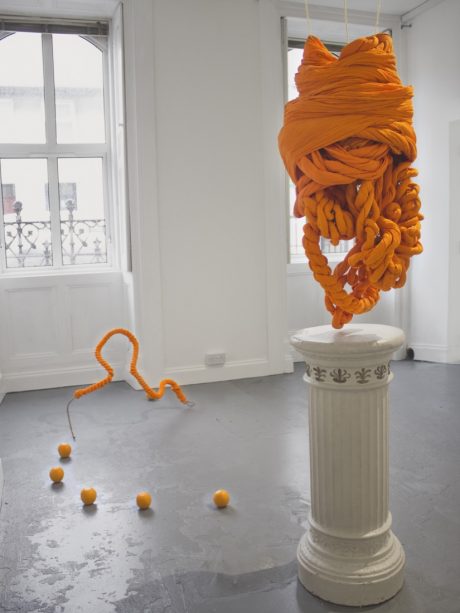 I worry I am being too pedantic. After all, this is art, not science – a certain amount of leeway should be expected. The problem is that the exhibition materials insist quite clearly on its conceptual framing, and whereas slippery classification might not matter in other cases – if a postmodern work is included in an exhibition devoted to modernism, who cares? – the issue here is that the discourse the curatorial team are most insistent upon is one that is explicitly designed to challenge its concealment by other conceptual frameworks. Put differently, by raising queerness only to displace its content, the exhibition does the very thing that the discourse is at pains to prevent.

To be fair, if the opening rooms hadn’t fulfilled the thematic promise so neatly, I may not have given the curatorial framing a second thought. Besides which, the problem I am diagnosing – that the thematic structure is an awkward, cumbersome fit – doesn’t take away from the calibre of the artworks in IMMA’s collection. In addition to the emerging artists I mentioned above, there is plenty of exhilarating work by the likes of Amanda Coogan, Kiki Smith, Derek Jarman, Alice Maher, Apichatpong Weerasethakul, Vivienne Dick, and of course, IMMA’s current luminary, Lucien Freud. Despite my reservations, I can easily recommend the exhibition and will gladly visit the next chapter – I just can’t promise to read the programme.

The Narrow Gate of the Here-and-Now, IMMA: 30 Years of the Global Contemporary