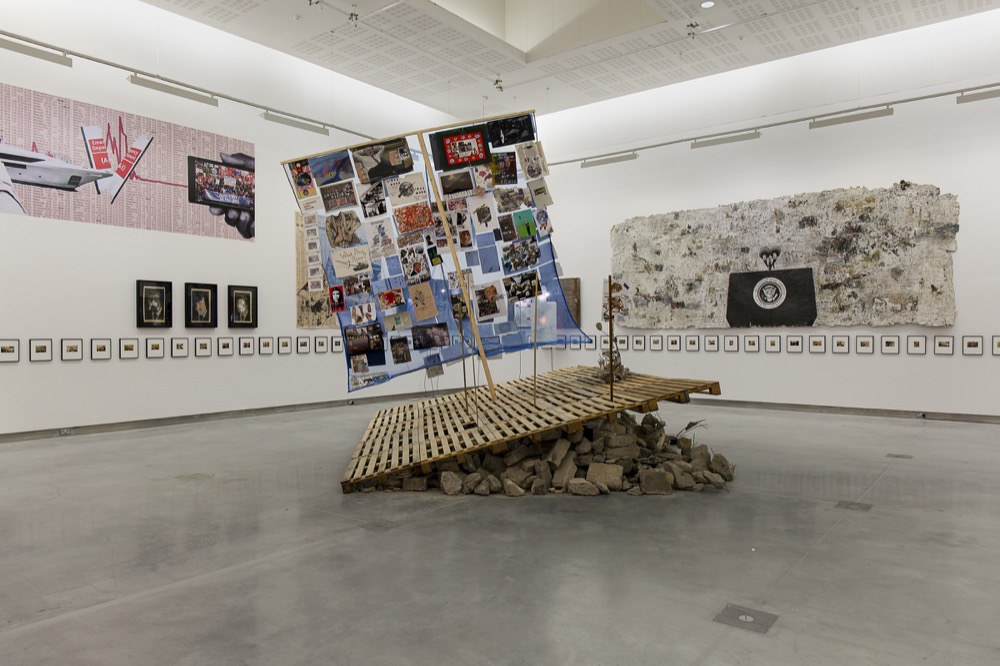 A perfect match for Rua Red’s inclusive philosophy, the multi-faceted “Finnegan’s Woke” – concocted by kennardphillipps – is a voice of clarity amidst political chaos.

With 17 prolific years of protest art under their belt, kennardphillipps – the brainchild of Cat Phillipps and Peter Kennard – are more optimistic than most. Their dissecting of dubious media narratives began in 2002, spurred on by the allied British invasion of Iraq. Whilst searching for a space wherein their angered response could be articulated, they came up short, choosing instead to form their own thought-provoking movement. Since their inceptive days, the duo have only further strengthened their opening premise – “trying to make work that can engage,” says Kennard, “so that when people go to [one of our] exhibitions, they’re looking at present times filtered through artworks in a space, on the street, wherever we show it.” That statement immediately holds up when scanning through their works, all of which liberally dismantle corrupt world leaders and disempower media complicity. Alongside multiple exhibitions in the US, Middle East and a myriad of showcases in their native UK, kennardphillipps has exhibited in Dublin on several occasions, having previously collaborated with PhotoIreland. When it came to staging their latest show whose title is a tongue-in-cheek riff on James Joyce’s Finnegan’s Wake, a community-centric space was imperative – so there was no question as to where it should settle. “Rua Red are really bound into their community,” says Phillipps. “They’ve fully embraced that involvement and, because of their total commitment to local arts, we’ve been able to realise [the exhibition concepts] beyond what we have realised before”. 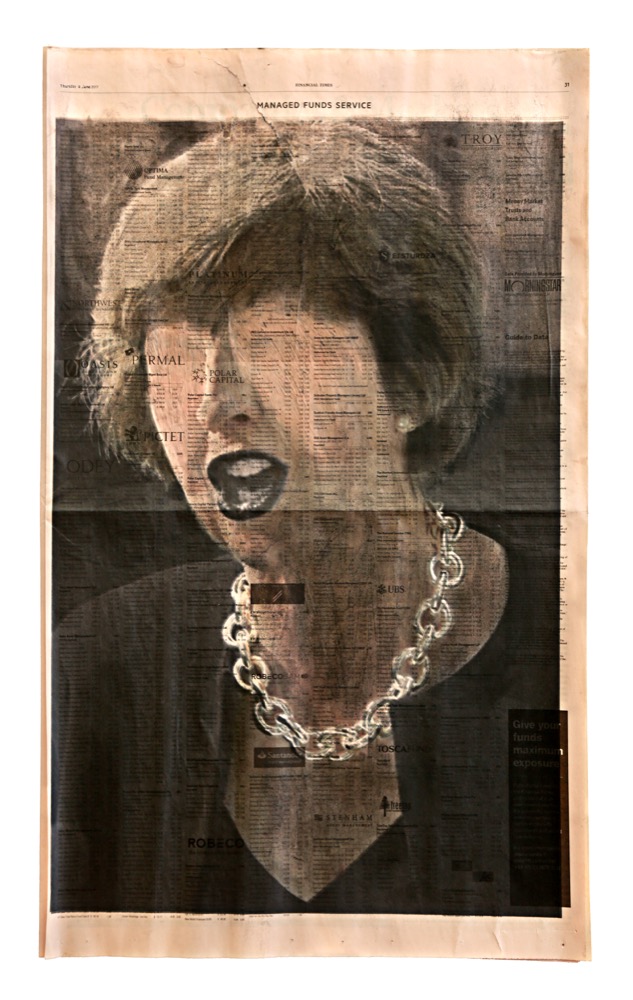 Whether your political savoir-faire is scarce or substantial, Finnegan’s Woke doesn’t boast any form of intellectual entry point. Its eclectic artworks are accessible to all, taking full advantage of Rua Red’s lofty space (particularly by Dublin standards) to showcase various photo-montages, prints, paintings and mixed-media installations. The exhibition’s rich materiality instantly reels you in, compelling you to engage with its scratched portraits of political leaders and layered newspapers (the latter covered with propagandistic spiel) in a much different manner to how we would interact with social media headlines. “We’ve experimented in a lot of different ways, not least because everyone is bombarded with imagery on social media, and things come and go there very quickly,” Kennard affirms. “When you see work that’s been made with different materials, it does engage you in quite a different way.” The exhibition’s wall-hung works revolve around a monumental centrepiece: a huge wooden “raft against repression”, referencing the treacherous, oft-broadcast journeys of migrants escaping from the Middle East and North Africa. It’s no coincidence that Rua Red’s neighbourhood is home to a number of settled migrants – painstaking care has been taken to tweak its contents to reflect the surrounding community, championing inclusivity in the process.

Perhaps the most striking aspect of Finnegan’s Woke – and a crucial accompaniment to its aforementioned raft – is the War on War Room, a workshop space in which passive viewers become active participants through fashioning artworks for the mast of the raft. Rather than curate a static (if impactful) showcase of their past and present works, Phillipps and Kennard were keen to create an ever-evolving exhibition, having previously toyed with the same concept in Scottish, Swedish and English galleries. “It was really important to us that the War on War Room was integral to the exhibition,” states Phillipps. “We’ve been working on that concept for a number of years, but I’d say this is our most successful iteration of it. It was so great to work with Rua Red because they were so up for the concept. In the past, when we did [the workshop] in a gallery, I wouldn’t say we were secretive but we also weren’t that open about what the concept was leading towards. We were worried about unknown works appearing in a public exhibition that’s got a long run – there’s a potential risk there. But with Rua Red, we were dead straight up and they’ve been so supportive about it.” With a 13-page catalogue of kennardphillipps’ imagery and text free for attendees to take home, the artists are unflinchingly modest about their own creative output, instead focusing on what outside spectators can bring to the table. “A lot of contemporary art is fabricated to a very high level of gloss which, again, separates it from people – it becomes a product. What we’re trying to show is the process beyond the work, which is why it’s very exposed in that sense. Each work is something that people could do themselves.”

The artists resided in the workshop for its first nine days, before passing the baton to Paul O’Neill, a local artist, and other Rua Red custodians. With a spectrum of ages and demographics having crafted works here, the response has been resoundingly positive, bar one misinterpretation. “There was one comment in the comment book – only one out of a tornado of good response – that said, ‘too many negative messages, too much negativity’,” Phillipps continues. “All the works we make are on very heavy subjects, but what we’re actually doing is ripping apart the accepted norm of what is happening in the world. The media has a tendency to normalise things that, were we to encounter them in our daily life, would be traumatically shocking. What we’re doing is countering this idea that these horrors are standard… Just the very act of letting people re-negotiate an image of something that has maybe passed through newspapers, television screens and social media, such as a photo of a representation of a victim or victimised situation, that act immediately dissipates some of the power of media’s propagation of normality. So it’s very empowering and obviously, the more committed time you spend on it, you can make really powerful artworks that reach a strong level of resonance.” 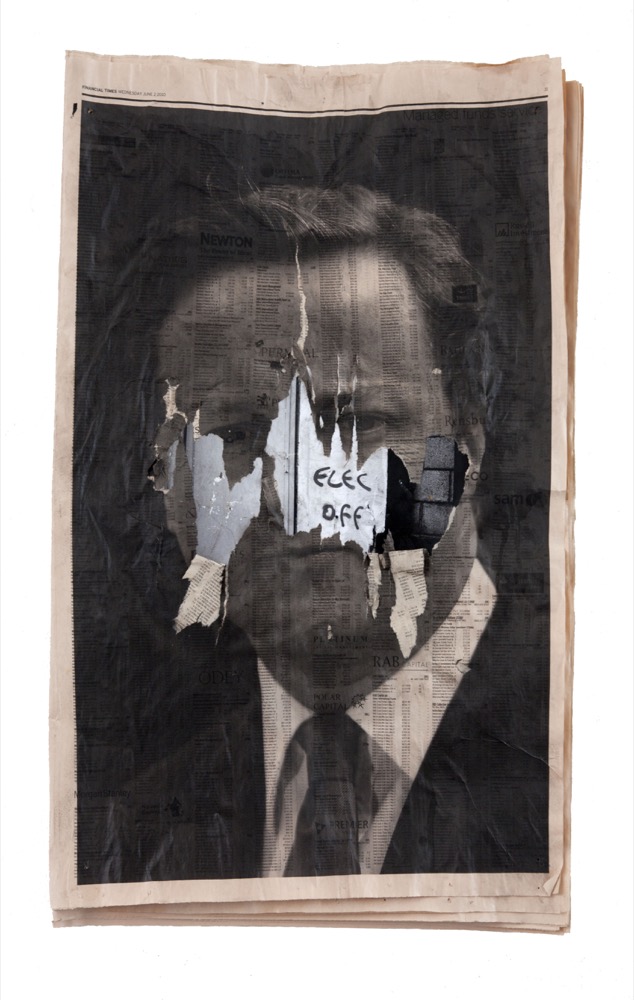 With media frenzy surrounding Brexit primed to reach a fever pitch this month, Finnegan’s Woke couldn’t be more aptly timed – yet as the exhibition’s archival works will testify, history may not repeat, but it certainly rhymes. In other words, the 2006 work Presidential Seal, another response to the events in Iraq, feels as thematically-resonant as the fresh addition of Kill Story (a Trump-inspired montage). Phillipps and Kennard’s proactive nature, and with it, their long-standing resolve, feel infectious. “Right now,” says Kennard, “it’s all about taking action. I think across the world, the gallery has become one of the few spaces where people can engage in a different way to works shown on a screen. It’s really important to think about art in relation to reality – art is always thought about as separate, but it’s a vital tool for engaging with what’s happening in the world. The state of the world now is such that if we don’t get more action against what’s going on, we’re all fucked, basically.”