He IS Tonie Walsh 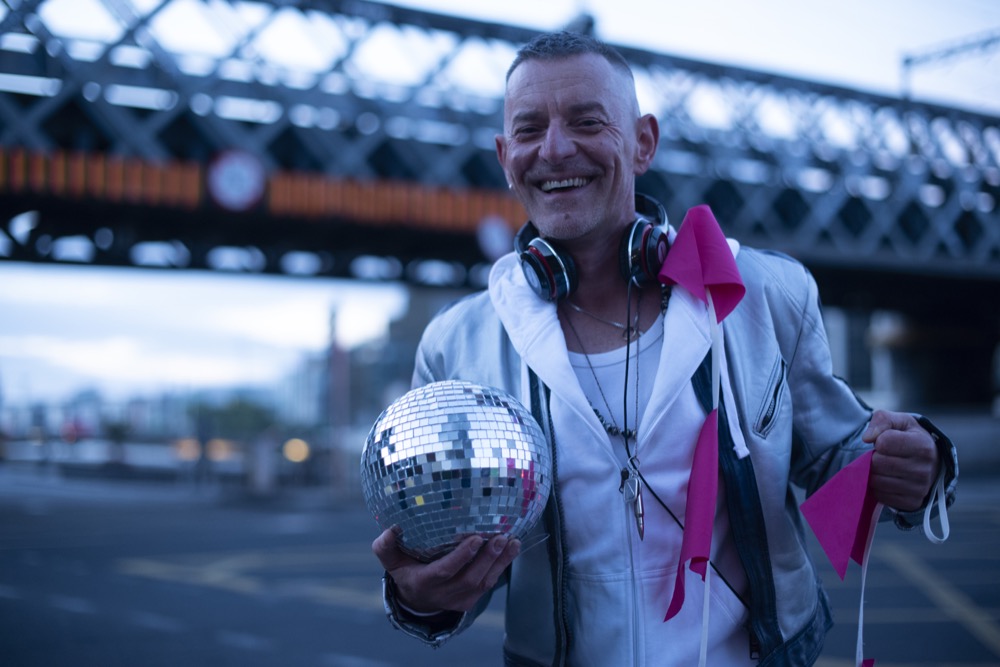 Activist, archivist, DJ, historian and ‘Godfather of Gay’, Tonie Walsh, brings his life to the stage later this month with his one-man show I AM TONIE WALSH. Written by Walsh and THISISPOPBABY’s Phillip McMahon, and directed by Tom Creed, IATW promises, in Walsh’s own words, “tawdriness, rambunctiousness and a certain level of OTT fabulousness” – so far, so Walsh. A meditation on friends, family and lovers, IATW offers a series of intertwining personal and social histories, taking in the LGBT+ liberation movement, the AIDS crisis and clubbing, narratives in which Walsh has been so central.

As a close friend of Walsh, I wonder how well I know him and how much remains to be revealed. I put this to him. “I don’t want to pre-suppose what any of my friends or people who know me think, [but] I would like to imagine that people are going to discover something new [about me]. I open up about things that only a very small coterie of friends are privy to,” he says. Although people may know more or less of the ins and outs of Walsh’s life thus far, arguably seeing them as one will create a richer understanding of the man. He agrees: “Once you join up the dots it gives people a sense of some of the things, the triggers, the motivational aspects of my life, that actually drive me on.”

Beyond a one-time improv acting class with eminent Irish actor, writer and director Olwen Fouéré, of all people, Walsh’s formal experience on stage is limited. However, aside from the performative nature of his work as an activist, DJ, promoter and public speaker, he is indivisible from the sense of theatricality that accompanies him throughout the day-to-day, as anyone who has met him can attest. That surely counts for something. Maybe not: “IATW is a different beast. So much of the show is so utterly personal [and] really difficult. Even during the final read-through of the rehearsal script I had moments where I stumbled. I just welled up. I thought I was over that but [some scenes] always cut through me. I’m looking forward to being directed into the best way to act this. I can’t just go on stage every night for a week. I have to act it.”

While all the world truly seems a stage for Walsh, he admits that this is often a way of protecting himself, particularly in an age when privacy and discretion can feel luxurious. He explains: “I have a particular methodology around what I want to share and what I want to hold back. I’m all about holding something back. Either because I’m waiting for the right time to say it, because I’m simply not ready or because my audience isn’t ready.”

At a point in life where he is deciding what books to give away, the time has come to dispense with such strategic reticence: “I’m ready to unburden myself. I can’t keep this stuff bottled up. I’m hungry to share stories; stories of my life, stories of my friends’ lives; people who are still living and people who are dead. They have value, they’re entertaining, they’re necessary.”

With so much of the show concerned with loss (but, crucially, often inflected with humour and glamour), from his great-grandmother Isa’s death by suicide and his mother’s eventual submission to dementia, to the friends and lovers cut down by AIDS, a current of catharsis pulses through IATW. Reading me a line from the show’s final scene which addresses the effect of this hardship on him, his voice cracks and he struggles to finish it. 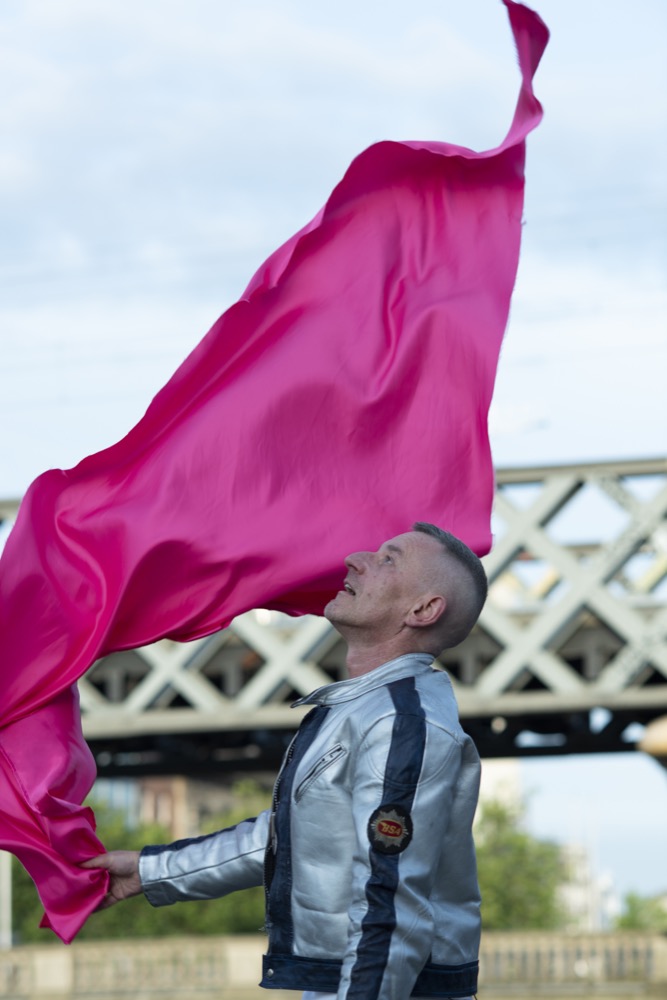 Does this pain, clearly still visible, ever lessen as he writes and edits, re-writes and rehearses? “Ask me that question on December 1st [when it’s over],” he laughs. It is no coincidence that the final performance plays out on World AIDS Day. HIV and AIDS assume lead roles in IATW – the devastation wreaked by the latter on so many of his friends in the 80s and Walsh’s own HIV diagnosis in the noughties. He re-approaches my question: “Without tipping into victimhood which serves nobody, what would help [the pain] lessen for me, would be to see some acknowledgement in Irish society of what we went through. Writing about it, talking about it, acting it out and provoking people is part of that process.” He pauses, again seeking composure: “I miss them. I miss my friends. I’m lonely.” What is remembered lives. Those souls, cruelly plucked from Walsh, will cameo alongside him.

As an out and proud person living with HIV, I ask Walsh if surviving ‘the plague years’ has coloured the experience of his own diagnosis: “A whole new scene in the show tries to get to grips with that. Another scene, that wasn’t in the original script but I insisted that we put it in, explains how I became positive. I got my diagnosis and I was shocked and also just resigned at that very moment. There was a part of me that just wanted to tell everybody about it just as a way of getting it off my chest. But I was also hugely guilt ridden that I became positive at the age of 45 and I can avail of treatment so I’m not actually going to get AIDS!” A wicked cackle erupts. He continues: “Survivor’s guilt really is a thing. [We were] paranoid and fear-struck, living with this constant thing of ‘I’m going to be next’. There’s a suffocating amount of guilt around becoming positive, around surviving ‘the war’. It’s time to park that shit and not be enslaved to it anymore.”

In its staging, IATW is conceived as an after party, hosted by Walsh in his home; the audience like a group of friends who’ve stumbled back there. To the fore of queer clubbing, from its underground roots, to its peak just before “the Septic Tiger” took hold, so many of Walsh’s relationships – gay and hetero – were seeded and preserved on the dancefloor. I ask him how he found his way there: “there will always be a group of people who want more, who are eager to stick their head over the parapet and see what is beyond; hungry to explore and excavate what’s on the margin. I’ve always been more interested in what’s on the margins. That’s where the energy is. [Clubbing] changes our behaviour and I’ve always been fascinated by that. I want to be taken down the rabbit hole.” On stage, Walsh will spin his show’s own soundtrack, taking the audience down there with him.

That the Project Arts Centre will become a site of the after session is completely appropriate. Amongst other things, after parties can be spaces for “meaningful conversation”, places where you can “fall flat on your face and know that there’s somebody who loves you and who you trust to pick you up and not judge you for it.” That is the atmosphere IATW seeks to cultivate, activating those positive, loved-up attributes of the session within and beyond the theatre space. 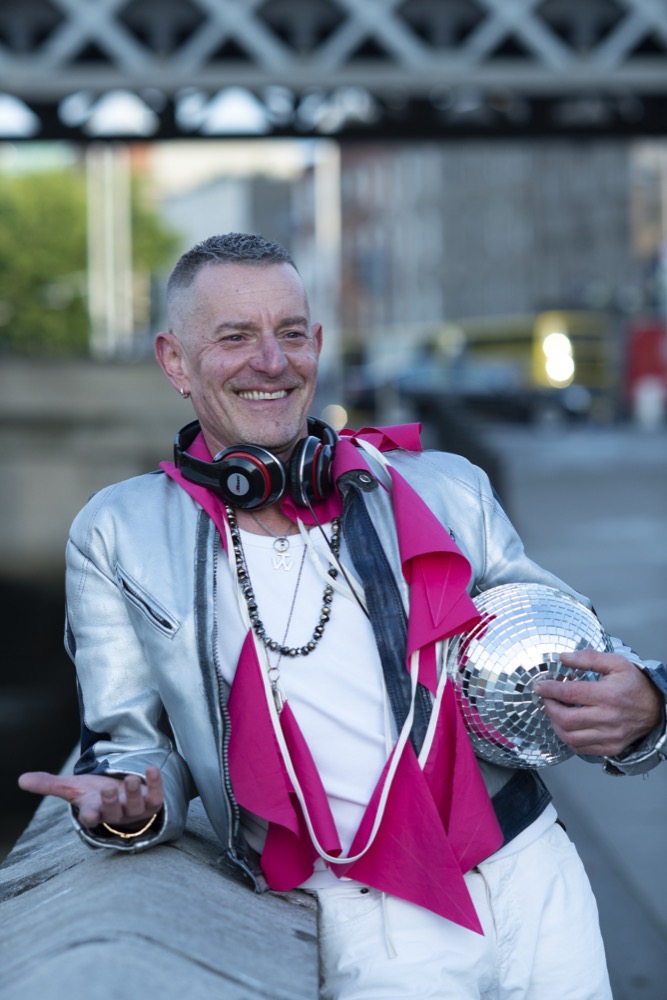 Charting the trajectory of the Irish LGBT+ liberation movement as it does, IATW opens by setting a scene of an increasingly visible community enduring discrimination and violence – some of it fatal. Given all that Walsh has lived through, it is unsurprising to hear that he never expected Ireland to be where it is today: “I cry a lot now. I regularly cry out of happiness for just seeing some of the beautiful things I see right now, in terms of our sexual minorities having a life. We live in an imperfect society, but people are having a life in ways that were denied to our brothers and sisters back in the day.” Today, the agency and urgency of younger generations sustains him and to be sure, IATW is a piece of intergenerational dialogue: “When I’m in a bad place, I dig deep down inside me to find something or soak it up from the people around me. That’s my survival instinct.

In spite of the “brittle homophobia” of the 80s and 90s, be that harassment by the [Garda] Special Branch at Dublin Pride or being spat on by the DUP at a youth conference in Belfast, Walsh’s resilience is remarkable. It would be an affront to his character to ever raise a white flag. “It was constantly diminishing you, chipping away at one’s sense of faith and optimism, and belief in the system and one’s self. But I’m a dyed in the wool optimist.

“Life is brutal, but you do everything you can to push through that brutality. Maybe I came armoured, or developed my armour incrementally, but something just constantly makes me pick myself up and push on. I think it comes down to how much I love life.” Audiences should feel lucky to be let in and made feel part of his, if only for an evening.

I AM TONIE WALSH runs from 27th November to 1st December at Project Arts Centre. Tickets at THISISPOPBABY.com.