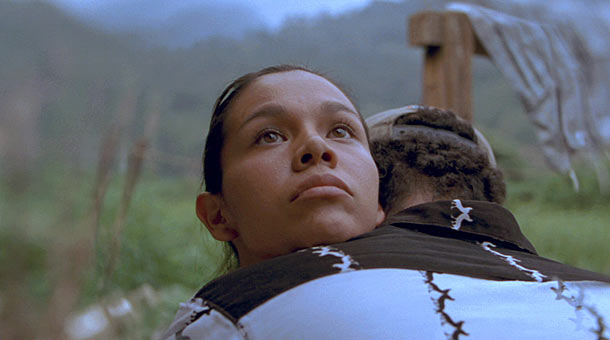 The third effort from Mexican filmmaker Carlos Reygadas, 2007’s Silent Light was indisputably his most accessible and widely lauded feature to date. As if intentionally rebuking any newcomers, his latest film, Post Tenebras Lux, is his most obtuse and challenging work yet, eschewing linearity in favour of a disjointed narrative and Malick-esque sensibility. Implementing the use of a double lens that blurs the exterior of the frame, the film sharply divided critics at Cannes but nevertheless went on to win the Best Director Award – undoubtedly a sign of singular cinematic vision.

The title in Latin is “After Darkness, Light”. Can you explain what the phrase means in context to the film?

Basically, the title connects to the main character, Juan, who has wealth, health and the company of his family – what we call everything – but somehow he is still unsatisfied. Only then, near the end of the film there is a beam of light that connects him back to feeling, which maybe he was lacking. This is basically what I think is the case, at least philosophically, with Western men and women.

Each character seems to be striving for personal “light”, regardless of their situation, economic or otherwise, in order to emerge from their own personal “darkness”.

Well, we’re all struggling to have the best life we can. Of course, this is complicated for various reasons and we seldom achieve such a result but at least we strive for it. This is what somehow dignifies the human species. So yes, these people are always struggling for something and while they obtain very little, at least they are striving for something. That’s why the film is very optimistic. Well, maybe not very optimistic, but somewhat optimistic.

The film seems to encourage a personal experience from each viewer. For instance, one person in my screening laughed loudly during the “self-beheading” scene, while others had a more solemn reaction. Would you agree that your work encourages people to elicit a personal response?

You can put it that way but I tend not to because it sounds like relativism or postmodernism and I don’t think this is the case. I don’t want to tell people what to feel and think at each moment in the film because that would be relativist. The film is very much like a tree, or a situation you are seeing, or an experience in life; an objective thing. So the way you relate to it shows much more of who you are and how you think and how you feel, rather than what the things are. Basically, I’m trying to share feelings, thoughts, questions and experiences with other people so they can feel something, which doesn’t have to be exactly what I want them to feel as if I was a circus master of ceremonies.

Much of the story is somewhat autobiographical. You also use your own children as actors, your own house as a location and dedicated the film to your wife. Is this a story you felt you needed to tell? Have you always planned on doing some autobiographical work?

I like to talk about the things that are dear to me and that I know well, but that doesn’t necessarily mean that the film has to be personal or intimate. Although there are my children, house and so many things that are close to me, I don’t feel it’s as personal as my previous film Silent Light, for example. That film was in a language that I didn’t even speak, but the conflict and resolution is closer to the way I feel in life. In this film the ideas are more external somehow, even though I’m constructing the fiction with things that are really dear and close to me, but I don’t feel so related to the characters; the way they feel and the wider questions they ask. But generally I like to talk about what I know, whether internally or externally.

Family is obviously quite close to your heart. You’ve lived and worked in numerous different countries. In your experience, does the notion of family transcend where you come from, or does family mean something different everywhere you go?

I suppose the idea of family is always pretty much the same thing. In the end it comes down to a sense of security. It can maybe be an illusion; in the sense that we are definitely alone philosophically in the end, but on another level I think we feel most secure within a family.

Do you think it’s something each character in the film needs to thrive and pull themselves out of their personal darkness?

Maybe, but I don’t think necessarily it’s only possible through family. Sure, Juan has his family structure and Seven is trying to reconnect with his own family unit, but he also seems perfectly content by himself. Basically, I would say it’s more of a social thing. Most people are married and have families, so it’s the way we tend to organise life. It’s a sense of security in doing things like everybody else.

There are numerous religious allusions throughout the film, including a CGI manifestation of the devil that sneaks around the family casa. Do you feel that religion is an important structure for someone seeking their own personal light?

I don’t feel religion is necessary to be content, or to have conviction and principles. Actually, the devil in this case is more about the cultural way we comprehend life and the world we live in. When the devil comes into the house I’m not trying to say that the devil is loose and therefore a terrible evil is around us. What’s happening is that it’s a six year old child that encounters this devil in his home, who doesn’t hurt him or act against him in any way. He simply brings his toolbox into the parent’s room. So it’s about the way we try to understand life which doesn’t really make sense to a child, who doesn’t know about or couldn’t care less about what evil is. Doing good or bad actions to others or oneself is something that adults do and at that level, children can’t comprehend fortunately. The whole film is very much about how this idea affects us and how wanting to organise life in such a fixed and moralistic way hampers us from being free. 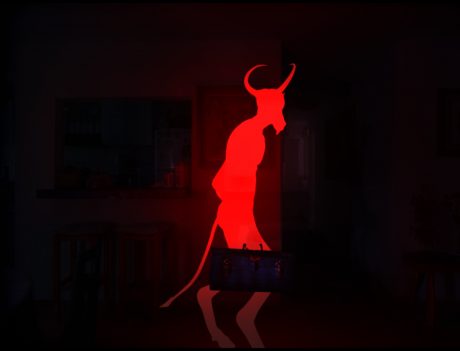 It’s an interesting depiction of the devil. Although he appears harmless and the scene is somewhat uneventful, there’s still a level of eeriness present.

Absolutely. The devil or any image that we’re unfamiliar with or can’t relate to is fearsome by itself. It’s a terrible image of course, but in the end this fear doesn’t harm us. It’s more the idea of the fear that is worse than the harm itself very often, so it’s definitely creepy. One of the things we really tried to go for when designing this devil was not to descend into the world of fantasy and create a horrible figure, but rather to leave things to the imagination where things are much more powerful. I remember when I had nightmares as a child, it really was more like this; where you wouldn’t know if it’s alive, if it’s actual flesh, moving or not or existing or not, whether you’re imagining it or if it’s really there. That’s what can be so fearsome in life.

You used a refractive image at the edge of the lens for most outdoor scenes, creating the idea that the refracted image of what is done outside is less real than what happens inside. What was your intention with this technique, or was it purely experimental?

Basically, I decided to blur the image because I’m fed up with the digital mechanical images we see all day long. Human vision doesn’t work that way and I don’t think the point of technology in the sense of photography is to reproduce images in such a way. So when we were installing this lens in front of the main lens by accident we found that images could be doubled. The moment I saw that I had this intuition that it could be used to make a film where things look different from the way they are perceived by the human eye. I thought this interpretation of images could be powerful and meaningful. If you want to see images as they appear, you can just look with your own eyes, but if you watch a film you should always be ready to see things differently. Unless of course, you’re only used to Hollywood films and that’s all you want to see and expect in life. Some people think that films have to be unidirectional, in that you’re told how to feel all of the time, with no ambiguity – just the opposite of what life is actually. Luckily, I’m in a position where I don’t have to make films for people looking for that.

So you’ll never make a film with a conventional narrative structure?

Well, I make films out of personal necessity; to express ideas, questions and fears. So I suppose they will always be different and reflecting an individual human more than someone wanting to make films with a recipe; films which some people call “perfect”, which I think is absurd.