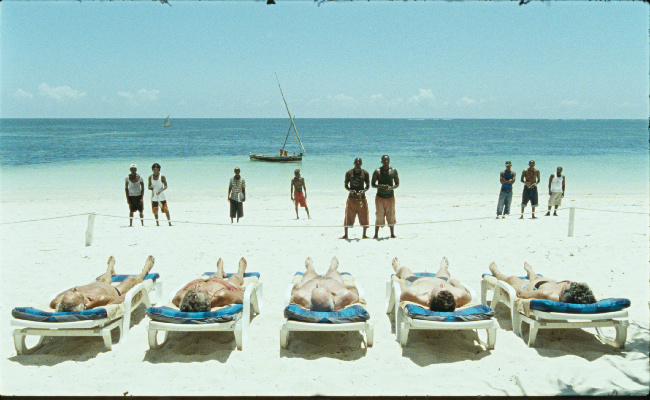 Ulrich Seidl’s films are difficult, antagonistic affairs. From 1996′s Animal Love (“Never have I looked so directly into hell” – Werner Herzog) to 2007’s Palme d’Or nominated Import/Export, his is a social realism of a most unorthodox kind, characterised by his trademark tableau compositions, which are evocative of early cinema as much as the monolithic imagery of religion and capital. Seidl’s scripts contain no dialogue, are improvised on set, and his blending of documentary and fictional film form, including his use of non-professional actors, gives his work an uneasy, direct quality.

His Paradise trilogy, divided into three parts — Love, Faith and Hope — centres around a family: a mother, a sister and a daughter, who are each personally dissatisfied, and who seek relief, or ‘paradise’, in various unusual ways. In Paradise: Love, released mid-June at the IFI (Faith and Hope will screen in mid-July and August, respectively), the mother, Teresa (Margarete Tiesel), goes in search of love at a Kenyan beach resort, participating at first reluctantly in the local sex trade where white ‘sugar mamas’ buy the affections of African ‘beach boys’. Both parties’ satisfaction — for the women, a sense of being desired; for the men, continued financial support — is contingent on their interactions not being acknowledged as a transaction, which has unsettling, uncomfortable results.

You shoot without a script in the conventional sense of the word: is this necessitated by working with non-professional actors?

Well no, let me say that, basically, I write the script originally with my wife, and let me add that the idea for Paradise was initially that the three films should have been just one film, with three episodes. It was only at the cutting table that it turned out that they would be three individual films.

The script that I write is very precise and very detailed, but I don’t write any dialogue. This has got nothing to do with whether I am working with professional or non-professional actors, it’s a question of having the actors arrive and having them play with something that have not learned or memorised as a text. And the actors themselves do not have a script, it is only at the time of shooting, on the set, that they are told what they are expected to perform.

Could describe your casting process, particularly for Paradise: Love?

Well, the casting process was, in this case, a very long process. I initially wanted my ‘sugar mama’ to be played by a professional actress, and I monitored several actresses for quite some time, for about a year, because I wanted to be sure that the actress that I would eventually choose would have the right corporality, would be able to handle her own body in a professional way, and would also be able to perform in the nude quite naturally for the camera.

A few weeks before we started the shooting, I went to Africa with three actresses, one after the other: I wanted them to try out, so I could find out right there, on site, how they would communicate with African men, how they would touch the skin of African men, and things of that kind.

It was only then that I decided in favour of Margarete Tiesel, and for the ‘beach boys’ it was the same thing: for about one and a half years I went to Africa, to Mombasa, to research and find out about the lives of the men there, the living conditions, their experiences with white women, but also the family backgrounds that they had.

Paradise: Love contained a lot more handheld camera work than many will have been used to seeing in your work. Was this a conscious aesthetic choice on your part?

No, there are also a lot of static shots in the film. For example, dialogues are often shot in a static mode. I don’t really know what the proportions are of handheld or static camera, and I did not make a deliberate choice at the beginning of shooting in favour of either format: it is something that will come out on site, when you decide how to shoot the scene.

Would you agree that, with the geometric framing, with the tableaux that you describe, coupled with the handheld camerawork, that yours is formally a cinema of contrast, of opposition?

Yes, it is true that with a handheld camera, you have more of a documentary-style camera, and this is in contrast to the static camera, with which I construct the tableaux in very precise detail, down to the smallest millimetre, so that they are kind of artificial in a way. But by some miracle, this is not a contradiction as such.

Does this contrast also exist on the level of content? I’m thinking specifically about Paradise: Love here, which is not a film specifically about racism, or neo-colonialism, but also about misogynistic attitudes in the West, about the social context in which these things exist…

Well of course the film is a reflection of our Western society, and this is the reason why the women are looking for a man in Africa, not in Austria. This can be explained by the fact that we live in a society where there is a quasi-dictatorial concept of beauty. The media conjure up a certain, dictatorial image to which, at a certain age, women cannot conform. And a second point is, of course, that it is quite unusual that women would be seen behaving in such an overtly sexual or racist manner, but then there is an abyss in every one of us.

Insofar as an apolitical reading of the film, or of your films in general, is valid, do you think that this is a film specifically about loneliness?

Yes, it is also a film about loneliness, because the woman, Teresa, does not find a man, she is lonely and she remains lonely because it is her experience there, in Africa, that the men are not looking for her, but for the white skin.

How important do you think it is for the audience to remain empathetic towards your characters, even as they do terrible or shocking things?

Do you make a conscious effort to be confrontational with your audience?

Well, it’s not a question of being provocative, it’s a question of, to a certain extent, facing the truth. If you allow that, as an audience, if you admit that you have to face the truth and become aware that you yourself are responsible and that it is society that has to bear up to this responsibility… which of course is not something that is always easy to accept.

And of course the audience will become irritated in a way, and I think that this irritation at some point will then start a process in the audience, in the viewer, and will then cause some reaction to this irritation, which means that there must be some awareness of what is going on, which may then lead to a change. This is then a very positive aspect, and I think it needs to be observed.

Religion and sex are constant themes in your filmmaking. Could you explain the significance of religion to Paradise: Faith, the trilogy’s second part?

Well, in part two, the central character is the sister of Teresa, her name is Anna Maria, and she falls in love with Jesus. Jesus is not only her god, but her lover, who she sexually craves. She goes out and does missionary work for Jesus, and through this work, she experiences the world. She lives in a claustrophobic setting until, one day, quite unexpectedly, her estranged husband returns to her.

Many years ago, I made a documentary called Jesus, You Know, and it’s about the intimacy of praying, and the act of praying. This is actually the origin of the second film, and also where I came across this statue of the Virgin Mary that is being carried around and taken to different people’s places.

This film is also about corporality, because here Anna Maria beats herself, self-flagellates, and this is for Jesus. Of course, flagellation is something which causes pain, but it also induces lust.

With the trilogy’s third part, Hope, you return to another theme from earlier work—Models was, in part, about eating disorders, and here your protagonist attends what is called a ‘fat camp’.

Well yes, you are right, this film is again, as well, about corporality. In Models, it was about slim bodies, but here we have overweight, obese children: the main character, Melanie, is an overweight 13 year old girl, the daughter of Teresa, and while Teresa is in Africa, she goes to this ‘fat camp’. While she is there, she falls in love with an older man, who happens to be the doctor at the camp.

Again, this is a reflection of our society. The number of obese children is going up. Statistics show that in some school classes, more than 50% of children are overweight or obese. This is a societal problem. Family is a factor, loneliness, indeed, is a factor: I researched this quite intensively with young people and often you find that these are only children, or solitary children, left to their own devices.

In the spirit of engaging with underlying structures, I believe you are making a film which quite literally does this, about basements in Austria…

Yes, this is a project that I have called In The Basement, which will be finished soon, and it’s about Austrians and their relationship with basements, and particularly about men. Basements are, in a way, the domain of men. This is where they will go in their leisure time, where they have their hobby room, but also where they go to spend time with other men. The basement, to us, also has certain connotations of darkness, of fear, and they are also, of course, places where crimes occur.

In his novel, The Loser, Thomas Bernhard remarks on Austrian windows being dirty so that no one can see inside. Do you think there is a certain secrecy, or furtiveness, to do with basements or interiors, that is specifically Austrian? Is In The Basement culturally specific to Austria?

Well, I don’t see it that way. I think, certainly, that many major crimes were committed in basements here in Austria, but also that they have been committed in other countries. Perhaps they have been more readily covered in this country. It’s not a film about Austrian situations or Austrian people; the film might as well have been shot in Germany or England or France, but perhaps it is here that a certain escapism takes place and can be found, something Thomas Bernhard refers to.

To talk about another of your countrymen, would you like to win an Oscar like Michael Haneke?

I think that my films will never win an Oscar [laughs], I think they are too, let me say, radical!