This Ain’t No Disco Live 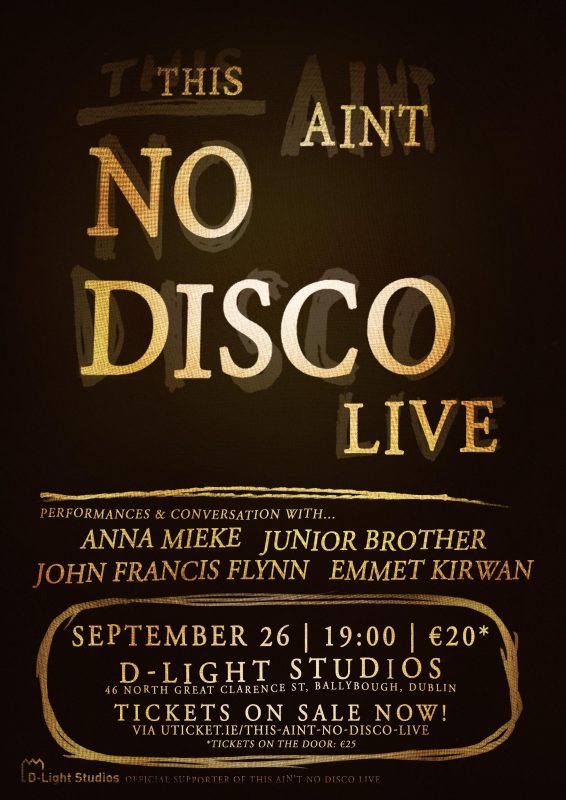 ‘This Ain’t No Disco Live’ celebrates the launch and raises funds for the highly anticipated second season of the show, set to be released on New Year’s Day, 2020. This Ain’t No Disco is a dynamic audio-visual showcase, representing some of the most talented but under-represented and hard to pigeonhole musical visionaries in Ireland today. Hosted by DJ (and former host of the cult 90’s TV program, No Disco) Donal Dineen, This Ain’t No Disco is voluntarily produced by a skeleton crew of friends and music enthusiasts, directed by music documentarian and award-winning cinematographer Myles O’Reilly.

Announcing the ‘This Ain’t No Disco Live’ event, Myles commented:

“After a recent funding rejection, we made a renewed push to look to our viewers for support via the crowdfunding platform Patreon. The reactions were tremendous and the feelings of love out there for our efforts, palpable. Not only has it given us great hope, but we genuinely feel that cutting out the middle person, and sustaining our efforts solely through the goodwill and generosity of our audiences is an entirely natural and beautiful circumstance, made possible by the freedom of the internet.

With your help, similar to our first season, we hope to create four new episodes and release them in Winter, Spring, Summer, and Autumn. A two year hiatus has been just long enough for many new acts to have emerged from Irish soil with new, unique and exhilarating sounds, across all genres. We hope to cast a lens on as many as possible, in locations East, West, North, and South this island. The backbone of each episode will feature Donal bringing together inimitable creative forces to discuss and collaborate in cultivating a sound that’s completely new and entirely true, to our present day, to our people and to our culture.”