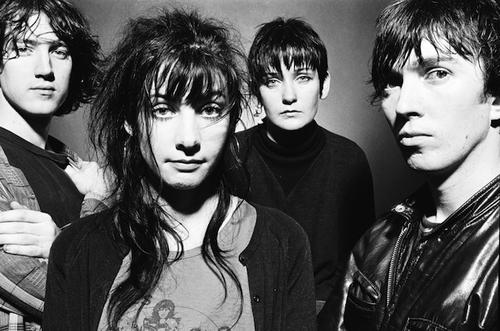 Bilinda Butcher meets us at the Brixton tube station and suggests that we go in her car to a park nearby. Her youngest son Billy has reached the age where sitting in a cafe is not the best of ideas. We go to Brockwell Park, a large beautiful space with rolling hills and ancient trees. The place was immortalised in a song by Red House Painters on their album Ocean Park. We pass a little kennel on the way to our picnic and Bilinda tells us that the ashes from one of her dogs were spread in this park.

My Bloody Valentine was formed in Dublin in 1984 by Kevin Shields and Colm O’Ciosoig. A couple of new members joined and after a few overlooked releases, the band recorded their first album, Isn’t Anything. It hit the English indie-scene in 1988 like a bomb, and its thick and hypnotic sound gave birth to a scene that the UK press called Shoegazing. Bands like Ride and Slowdive soon formed in the wake.

The line-up consisted of Kevin Shields and Bilinda Butcher on guitar and vocals; Debbie Googe on bass, and Colm O’Ciosoig behind the drums. My Bloody Valentine started work on a follow-up, but it would take three turbulent years before Loveless, their second album, was released in 1991 – an album which is still regarded as one of the most influential rock albums of all time. Kevin Shields’ groundbreaking use of his guitar and guitar effects still influence bands today. It’s been said that the cost of recording Loveless was more than a quarter of a million pounds , which almost bankrupted Creation, their record company. The pressure put on the band almost caused them to implode.

In 1992, My Bloody Valentine received a large sum of money to sign for Island Records. They bought a house and built a studio where the new album was to be recorded. But nothing ever happened. Up until 1997, the band were still on Island Record’s payroll in the hope that they would produce another masterpiece, but the only thing that emerged were rumours of mental illness and writers’ block.

Today, Kevin Shields enjoys an almost genius-like status, a bit like Brian Wilson of the Beach Boys. But My Bloody Valentine’s music is almost as much characterised by Bilinda Butcher’s singing as it is with Shields’ guitar playing. Today she’s 46 and has three kids. This was her first interview for well over ten years.

Yeah, I’ve always had pets. Kevin and I had a chinchilla. The problem was that we bought another one, which resulted in 20 puppies. I read in the Guardian that our house had been taken over by neglected ratty creatures that we kept in a cage (laughs). They also stated that we had barbed wire everywhere. Nonsense. There are a lot of things that have been said about us that aren’t true.

I think someone described Kevin as a Howard Hughes-like person who never washed. I think it was in a book about Creation Records. The only odd thing about him was that he slept at weird hours. We probably smoked too much in that house, but he needed to revitalise himself and recoup his strength. For me it took several years, all the fighting had us all feeling really drained.

You said that you never really did interviews back in those days. Why
was that?

I don’t really know. It just happened that way. Kevin was saying really good things and I didn’t want to say something wrong.

How come you spell your name Bilinda and not Belinda?

That comes from my grandfather. If I’d been a guy I would have been named Bill, but since I was a girl it became Bilinda. John Peel once said on his show that I was being pretentious and tried to be special by spelling my name differently. That bugged me. That’s the name I was given, it’s in my passport! But I didn’t have the energy to write in and complain.

Where did you grow up?
First in London and then in Derbyshire. In London, punk ruled but further north people listened to northern soul. I loved northern soul and used to go to all-dayers since I was too young to go to clubs.

You know they had the all-nighters at Wigan Casino, that was the place to go. There were a couple of places, Nottingham Palais and Matlock Bath who arranged all-dayers instead. You went there in the morning, listened to music and danced all day.

What type of area did you live in?
We were living in an area called Golden Valley, it had one pub and a couple of houses and it was all very conservative. A friend of mine dyed his hair green one day. When my mother saw him she forced him to wash it with Ajax before his mum would see it.

Probably pretty embarrassing for you?

She was a bit special. To dye your hair was very uncommon at the time, it was something you would perhaps do if you lived in the city centre of Nottingham or Derby. In Golden Valley, I was considered a weirdo. My clothes were different. For a long time, I only wore clothes from the 1920s that I bought in a shop called Penny Feathers in Nottingham. My friend Dian – the guy who dyed his hair – had a portable gramophone that we used to bring to the forest where we listened to records. My mother thought I was up in the clouds. I never watched the news or read the papers; it was like I lived in another era. Everybody was into punk and I was living in the 20s and 30s.

How old were you?

Around 16. Then I went to London to study and to go to gigs. I saw Bauhaus, Sisters of Mercy and loads of other Goth bands. I went to dance classes too but had to quit because I got sick.

I had a chronic urinary infection. I had to go to the bathroom all the time and couldn’t dance for even a whole lesson so I had to quit. It was a nightmare to get in and out of the tricot. In hindsight, I’ve realised that I was mistreated; no one took my problem seriously. The doctors seemed to think it was something young girls get when they move away from home and start to have sex. In the end, I had a serious liver disease because of it. It was a shame I had to give up dancing, I loved it. After that, I worked as a nanny with a French family for half a year, then my mother died and I had to go back to Derby to sell the house as my dad had already passed away.

Yeah wasn’t it? When I got back to London I rented an apartment with some friends and hung out at gigs, things like Birthday Party, Talking Heads and Joy Division. I think back on some of the gigs and really wish that I could see them today instead. Especially Birthday Party and Cramps. During that time I met my son Toby’s dad, he was a Frenchman and I used to go see French bands like Metal Urbain. We lived in Paris for half a year.

What were you doing in Paris?

I got some money when Mum died so I lived off that and took it easy. The idea was that we were going to work but we never found a place to stay so we quickly got bored living with his mother. We moved back and stayed with other squatters in Brixton. I had Toby and didn’t work for several years.

How did you support him?

The money after my mother’s death was enough for quite some time, and since we were staying as squatters, we didn’t really have any expenses. When the money from Mum dried out, I started to go on the dole. Everyone did at the time. But with Toby, it didn’t feel that great to stay in the squat, there was a lot of heroin and it’s not ideal that a drug user’s needle could sting your baby. Toby’s dad was flipping out because of all the acid he took and I just wanted to get away from all the madness. I moved back to my flat. We tried to live together but he was in too bad a state so it didn’t work.