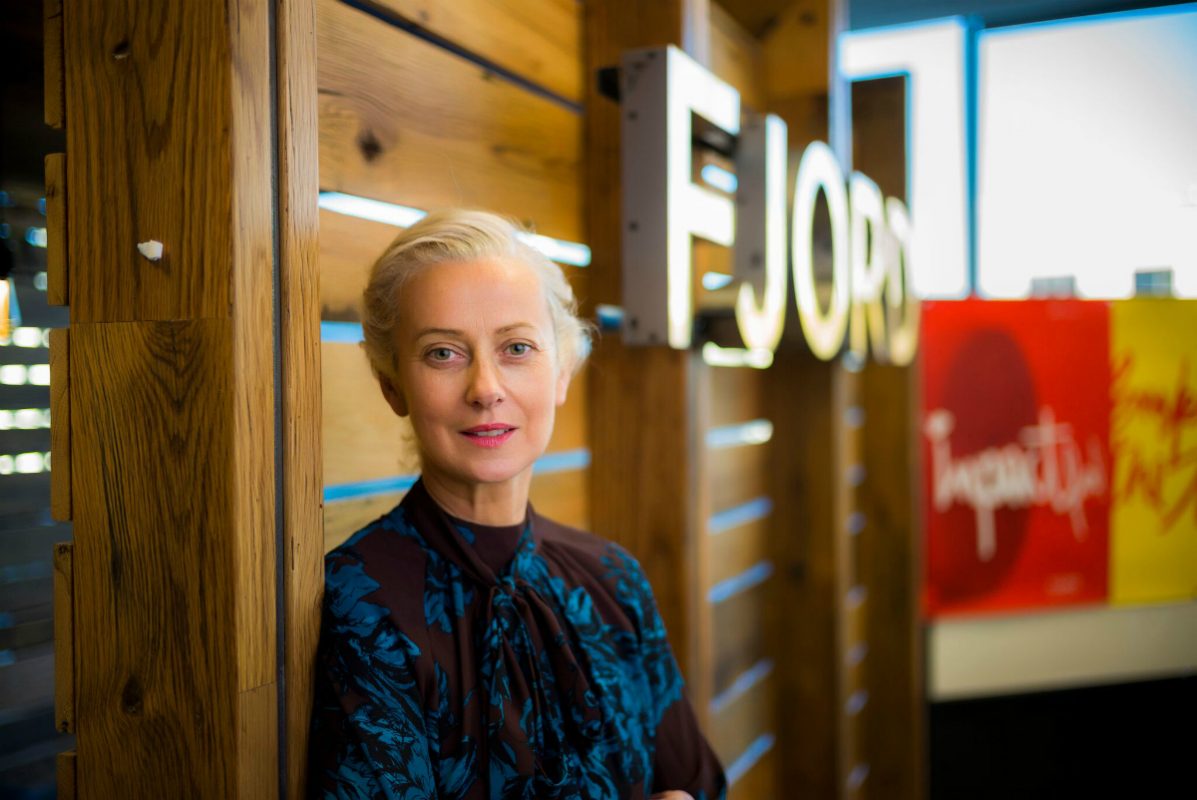 Lorna Ross returns to Dublin after a varied career with MIT, the US Military and the Mayo Clinic Centre as group design director and studio lead of Accenture’s new Fjord studio.

Lorna Ross has had a career in design which has seen her in a fascinating series of organisations and roles. Having graduated from fashion design in NCAD she went on to work on early wearables following a masters in the RCA (London). She has worked as a principal research scientist at the MIT Media Lab and a design lead at Motorola Futures Group, and consulted with the US Military, designing clothing and accessories for use by Navy SEALs in combat. Now, after eight years as design director of the Mayo Clinic Center for Innovation, Ross has returned to Dublin as group design director and studio lead at Accenture’s new Fjord studio here.

Strategic design acquisitions by large consulting organisations have been a regular occurrence over the last few years, with Accenture somewhat ahead of the curve with its 2013 acquisition of Fjord. At the time Fjord had 200 employees in offices across Europe and in the USA. It has expanded following acquisition, with its Dublin office (the Dock) opening last year. Such expansion comes with an array of challenges. Ross has been tasked with leading a process to define what the Dublin studio can offer Fjord, offer Accenture, and offer clients – and to articulate what it needs from all in order to produce work of meaning and value for a rainbow of stakeholders.

“There’s definitely a trend right now of acquisitions, of everyone being bought. Clients are turning up and saying: ‘and I want design’. It’s driven by the market. Clients are interested in seeing design baked into other consulting products. I think that’s the original impetus”, she notes.

“A lot of consulting firms reference ‘design thinking’, they use that term a lot without the visible evidence of design. Accenture has been really smart by keeping Fjord and keeping the brand, and allowing there to be tension, where the commitment to design is less about ‘eating it’ and more about co-locating; allowing design to somehow challenge a lot of the assumptions and standard practice.

“That’s really hard to do, that’s a fragile equilibrium to maintain: in terms of how the brand should be affecting the consulting model. People say they really want you to be disruptors or agitators. That’s hard to do on a day-to-day basis because people also want to be successful and fit in…I don’t think anyone is particularly surprised that it feels a little uncomfortable. Which is one of the reasons I came here: I like that uncomfortableness. If people were trying to make it feel really safe really quickly, you’d be just neutralising all the effect.”

For Ross, this context is the impetus for an assertive stance in terms of where Fjord fits in the already massive Accenture ecosystem (the firm has almost 400,000 employees in 120 countries). “We try to be provocative. We ask potential clients, maybe a little bit selfishly, ‘Is your goal aligned with our objectives?’. Do you have a high tolerance for things that are uncomfortable? If they don’t, we can then connect them with other groups at Accenture that are more incremental.” “There’s not a culture at Accenture of saying ‘No’ a lot”, she adds. “And yet we have to find a way of communicating our own agenda. It’s risky to appear to not be at the service of others. We’re here to help and not to be exclusive. So you have to socialise some ideas about who you really are.” 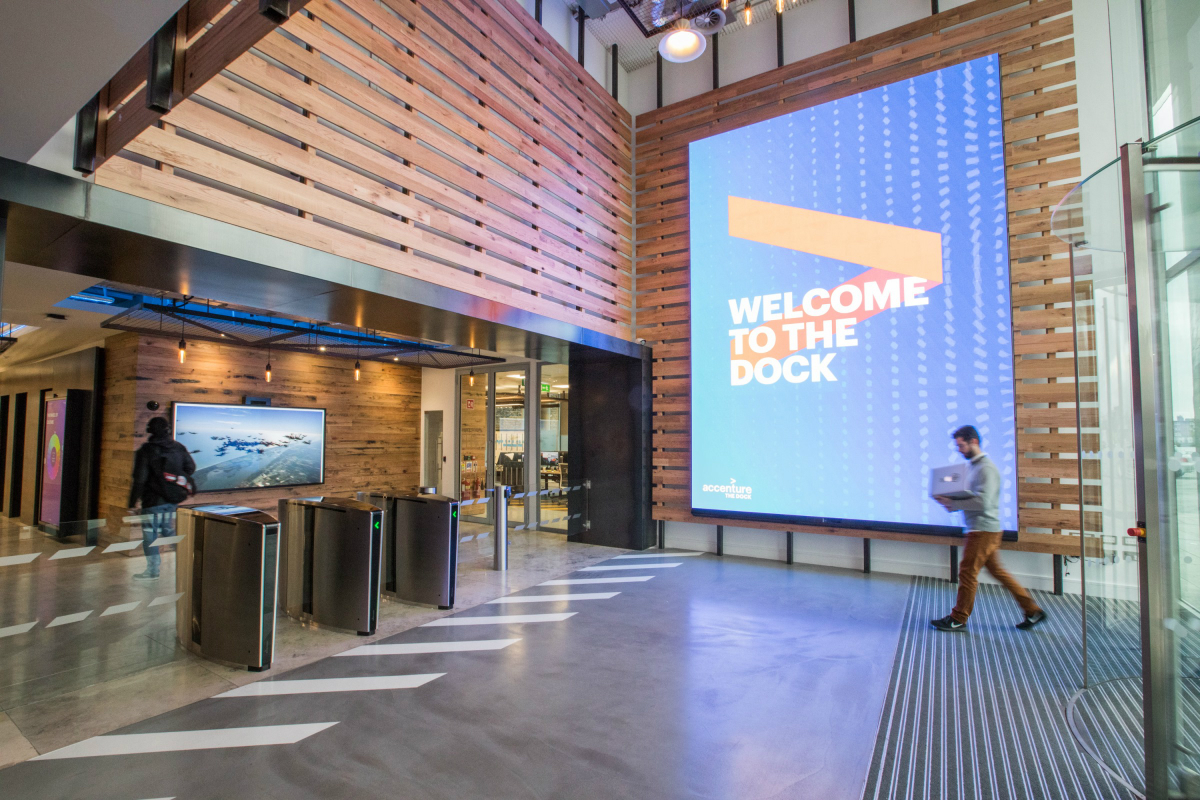 Those ideas are the product of an approach to leadership and process that confounds the apparent structures of large organisations. “Every time you walk into a room it’s an opportunity to win and look smart, but it’s also an opportunity to learn and be smarter. So are you going in to be right, to win, to look clever? Or are you hoping to come out of it knowing something that you didn’t know before? It’s all about attitude and the approach to the way we work here. It’s hard to be humble, but if you practice it others can admit to what they don’t understand, and that becomes a much better conversation than ‘I’m an expert, you’re an expert’; two people trying to figure out who’s smarter.”

“We should be comfortable being audacious…you don’t know what you’re capable of if you don’t challenge yourself. If you’re always reverting back to your own expertise, you never know what you could have done. I remember debriefing with some of my designers at Mayo and, looking back at previous projects, they all said that they wished that they had been braver. They got so hung up on the client being happy and the stakeholders being invested. I think it’s a leadership problem more than anything. That’s a lesson I’m definitely bringing here.”

Ross’s approach challenges some fundamental aspects of design culture – the idea of designer as maker – an idea that is particularly prevalent in Ireland given our long craft history. “My experience has always been that people have characterised design as being additive. There’s a sense that because it’s creative and generative and there’s novelty there should be things to look at and point at and name. We get so distracted trying to create those prompts and artefacts, it can be distracting from the work you really want to do. So we’re trying to get past that – those early teething problems. But they’re so normal – I’ve seen them everywhere. We have to be kind to ourselves: that happening is not surprising at all.”

Ross also discusses a personal goal to bring the benefit of these processes and outcomes to a broader group and to society. “I think a lot of it came out of being at Mayo and understanding that there’s a win-win that you can get. When you think about any advantage that an organisation or their clients get – by being early to the market, or being early to a new technology, or being able to have an exclusive: you can get that by really wanting to own and to be in control, but you can actually be more powerful in terms of how you’re going to share that. I think it’s strategic to understand how to share effectively.”

“I think it’s a really good time to be leading and comfortable with these questions, about not optimising for exclusive advantage, but thinking about the shared advantage that this stuff brings. I think that’s just a decision you make: I don’t think it’s terribly hard to do, but out the gate you have to start to think about all the different ways you can tell a story where everyone wins at different levels. Versus just focusing on your client: only on them and their market. What that actually does is disadvantage them because you don’t play out the ripple effect their actions could have in a really positive way. Those things can become more powerful over time: it’s designing for consequence. You’re designing for local effect and consequential effect. And I think people want that. Technology is becoming so incredibly smart, and there are so many questions people have about that – they need a safe place to ask those questions. I think it has to be here.”